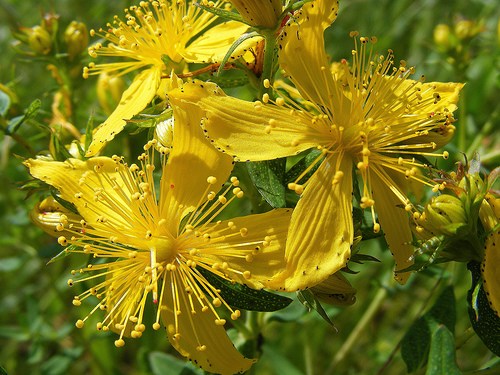 Extracts of Hypericum perforatum L. (St John’s wort) are now successfully competing for status as a standard antidepressant therapy. Because of this, great effort has been devoted to identifying the active antidepressant compounds in the extract. From a phytochemical point of view, St John’s wort is one of the best-investigated medicinal plants. Researchers in Europe have studied St John’s Wort for decades. They discovered a combination of elements in the plant, foremost of which is “hypericin”, react with specific chemicals in the brain to temper emotional discomfort, lift depression, and calm the nerves. Working very much like the common synthetic prescription antidepressants (maprotiline hydrochloride and imipramine), natural extracts from St. John’s Wort have shown to relax and soothe the psyche with minimal side effects

St. Johns Wort today has been found to be very beneficial in healing wounds and is especially good for dirty, septic wounds. St. Johns Wort has been used in case of putrid leg ulcers, that noting heals. Like the leach that was used not too many years ago for wound cleansing it does not destroy the healthy tissues and healthy cells but it cleans the dirt out of septic wounds. It helps reduce the inflammation in septic sores, in boils, in cellulite and lymhangitis.

The compound Hypericin was isolated from St. Johns Wort in 1942 and has been used as an anti-depressant for emotionally disturbed people. This tranquilizing quality from small quantities hypericin increase blood flow to stressed tissue. There is a reduced capillary fragility and enhanced uterine tone due to the increased Hypotensive blood flow.

The use of St. Johns Wort has been shown to demonstrate a side effect producing a photosensitivity. Hypericin is absorbed in the intestines and concentrates near the skin. An allergic reaction takes place when those with light fair skin are exposed sunlight. That exposure causes tissue damage and in some cases death has resulted. While taking St. Johns Wort one should avoid strong sunlight whether the skin is dark or light. There is a photosensitizing substance produced under the skin by this exposure to sunlight that causes the skin to burn.